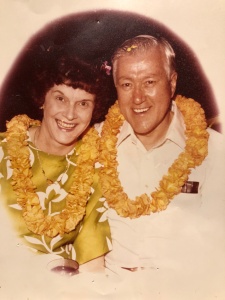 My mother, Margaret Stone Williams, passed away on November 22, three months shy of her 94th birthday.  I was on my way to New York City to preach at Middle Collegiate Church when I received the news, and spent most of Friday making arrangements to get to Kentucky.  Mom had been receiving palliative care for several weeks, so we knew the end was near.  Still, you are never quite prepared for your mother’s passing.

Mom and Dad were married for 73 years.  At the time of Mom’s death, both were residing in the nursing home at Sayre Christian Village in Lexington, Kentucky.  Dad is still there.  He will be 96 in January.

My mother was born in Kentucky’s Bluegrass region, an area that has more in common with the Virginia Tidewater than it does with the Scots Irish culture that permeates eastern Kentucky, where Mom spent most of her life.  Though she was the daughter of a tenant farmer, she would have felt more at home on one of the sprawling thoroughbred farms around Lexington.  But her reality was closer to the fictional Port William described in Wendell Berry novels.  My being is rooted in those Wendell Berry environs.  Whenever I am in that part of Kentucky, the land looks like it had been expecting me.

Mom did not see herself in a Wendell Berry novel, or a Jesse Stuart novel, another Kentucky writer whose works I devoured as a teen.  Berry and Stuart wrote about people rooted in the land.  Mom saw herself more as landed gentry.  There was something in the warp and woof of rural farming culture that left a deep wound in her soul that never really healed.  I never learned the genesis of that wound, though its effect was always in evidence.

With a two-year degree from Kentucky Christian College, Mom became a para-professional at East Carter High School in Grayson, Kentucky.  She was a voracious reader and a champion of education.  She loved that her eldest son had a PhD, and that I had a Doctor of Ministry degree.

Mom never really accepted my transition.  Dad has tried to do so, with grace and love and great struggle.  Mom came to realize she would never see me again if she wasn’t willing to see Paula.  I am grateful she allowed me to visit.  When a nursing home worker said, “Oh, this must be your daughter, she looks just like you,” Mom was stone silent.  From early childhood I had known what would happen if I revealed I was transgender.

If it sounds like my relationship with my mother was strained, it is because it was.  Mom was nothing if not complicated.  She was at once funny and expectant, persistent and determined, critical and guarded, fearful and prejudiced.  She was also extroverted, intelligent and curious.  That curiosity and extroversion rubbed off on her children and grandchildren.  My brother and I have always loved reading.  We don’t see each other often, but when we do you can be sure we will have stumbled across the same authors.  I’m currently working on novels by Luis Alberto Urrea, Wendell Berry and Ursula K. Le Guin.  Mom would have approved.

I so loved that Jonathan wanted to honor his grandmother by conducting her funeral.  He did a great job.  With humor and heart, he told stories that captured her essence.  Just last week I heard from Mark, an old childhood friend, who said he loved coming to my house because my mother would read to him.  I remember her reading to me in the first and second grade, when I was struggling to read.  With patience and persistence, she made sure I began third grade reading above grade level.  She could be very determined.

I suppose there were 50 or 60 at the funeral service.  Most of Mom’s friends are gone.  I was able to see a few of my own high school friends who worked with her.  It was wonderful visiting with them.  A number of women came up and offered their condolences.  I was grateful for their words, and the fact that most made sure to call me by name.  Other than my relatives, no men spoke with me.

Because we wanted my father to be a part of every aspect of the funeral, we did not have a graveside service.  He would not have been able to walk to the top of the hill where the grave is located.  But Jonathan and I, along with my brother and his son, followed the hearse to the cemetery, the same cemetery I mowed when I was in college, the same cemetery that was next to my grandmother’s house, where she took us on warm sunny days.

We walked up the hill and looked into the open grave, then watched as they lowered the casket into its vault.  I was reminded of one of the opening images of the movie Dr. Zhivago, when young Yuri Zhivago watches his mother be buried on a cold, windswept plain.  I imagine you always feel a child on the day your mother is buried.

I could not cry until I got back to the safety of a friend’s home in Colorado, where two close friends waited to comfort me.  I wept until I slept.  It was the night before Thanksgiving.

On the banks of the Ohio, in the city of Huntington, West Virginia, on a bright afternoon in May over half a century ago, Margaret Stone Williams gave birth to her second child.  For the gift of life and the love of learning she imparted, I am grateful.  For her intelligence and wit, strong will and curiosity, I am thankful.  Rest in peace, Mom.  It’s been a long and difficult journey for you.  It is time to rest.  I love you.

28 thoughts on “On the Passing of Margaret Stone Williams”