That Day My TEDxMileHigh Talk Was Mentioned on Fox News

Last week was interesting. I received an email from a professor at Indiana University of Pennsylvania saying my TEDxMileHigh video had been used in her class, resulting in disciplinary action against a student. Because the case had not yet been adjudicated by the university, the professor could not speak publicly about the incident.

By the time I did a Google search, the incident was on Fox News, The London Daily Mail, Breitbart News, and a host of alt-right and Christian sites, including CBN, Christian Post, and Franklin Graham. None of those outlets sought comment from me. It is also important to note that none of them waited until the completion of due process at the University, when the professor and the university would be able to speak.

Several of the outlets made accusations about the TEDx talk that showed no one at the media outlet had actually watched the talk, or if they had watched it, had blatantly misrepresented its content.

The only media outlet that asked me to comment was the local newspaper, the Indiana Gazette. Their reporter watched the video, accurately quoted from it, and accurately quoted my words from his conversation with me.

The Fox News article devoted exactly 23 words to me. Five of the words, or 21 percent, were inaccurate. To put that in context, when the New York Times published its article about my son and me, Faith and Family in Transition , in June of 2017, that 4,000 word article had not one single error. Had the New York Times article contained as many errors, per word, as the Fox News article, the Times article would have had 840 errors.

When Franklin Graham tweeted about the story, he asked for prayers for the student, speaking as though the student had been a victim. The truth is that until the university issues its report, we have no idea whether or not the student is giving an accurate depiction of the event.

Truth matters. Jesus taught that it sets us free. That Christian leaders and multiple media outlets would publish information without adequate regard to its truth is frightening. It is non-Christian; it is malevolent. It shows no regard for the professor, the university, the other members of the class, or me. It endorses the single perspective of one young male student, while leaving all other voices silent.

A study posted this past week by three MIT scholars showed that false information travels more quickly on Twitter than true information. Last week the inbox of this blog was flooded with accusations and threats, which caused me to have to shut down all comments and remove contact information from the blog. The negative comments on the TEDx talk bloomed like a mushroom cloud. (It should be noted that the overall response to the TEDx talk, which now stands at over 300,000 views, remains 93 percent positive.)

In posting this blog, I have a fear. I fear I will have to delete comments from the left that are as inflammatory as the comments I have had to delete from the right. Last week I posted a very short piece on Franklin Graham’s decision to tweet about the incident. The number of Facebook friends who wrote pejorative comments about Graham alarmed me enough to pull the post.

Attacking those on the right is not the answer. Advocating for truth is the answer. It takes rigorous inter-subjective work to discern the truth. Major media outlets do not publish a story until they have multiple sources. Even if you do not agree with their editorial leanings, you can trust that they will go to great lengths to discover the truth, and will publish a correction if they make an error.

The deconstructionism we see in postmodernity is partly to blame. It begins with the notion that all truth is constructed truth. But through rigorous inter-subjective discipline it is possible to get very close to objective truth.  And it is essential that we try.

I am very concerned about the current disregard for truth we find in America’s highest office, and the trickle-down effect it is having on the rest of American culture. I know the truth of my current status in life. It is on the bio of my blog and the TEDxMileHigh site. I know what was in my video. I was the speaker. TEDxMileHigh did not edit out a single word, breath or step. And the media outlets could have known what was on the video too.  All they had to do was watch. 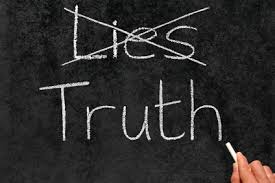