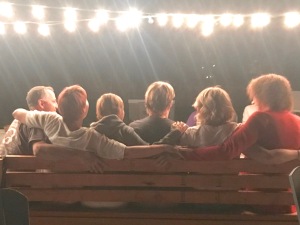 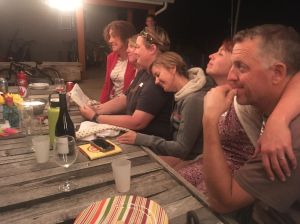 Last Friday evening I returned from the Oregon Diversity Conference, where I spoke twice on the subject, “Is Life Really Easier For Men?”  The response was wonderful, and brought a whirlwind of emotions I will have to write about some other time.  But I was eager to get home.

I rushed straight from the airport to the monthly community dinner of Left Hand Church, where I serve as one of the pastors.  The evening was just what I needed.  Instead of coming home to an empty house, I came home to a backyard full of friends at Jen and Eric Jepsen’s house.

Most of the food was gone by the time I arrived, but the conversation was filling.  One group got into a long discussion about guns and how to keep our children safe.  One of our pastors had led a table discussion at a community gathering earlier in the week.  I joined another table, where the group was playing a “what if” game.  The questions were not the simple ones, like “What is your favorite tree?”  They were questions like, “What is the best part of your life right now, and what is the worst part?”  The answers were honest and moving.

I looked around the table and thought, “It is a great privilege to know these people.”    One woman is a mom who works closely with a religious community that has a person in sanctuary.  Another is a labor and delivery nurse who compassionately and competently serves mothers in one of the boundary moments of life.

One is a long-time elementary school teacher who loves her students with every ounce of energy she has.  Another left everything she knew to boldly fashion a new life for herself in Colorado.  The man at the table is a Colorado entrepreneur who serves on the board of the local homeless shelter.  Left Hand Church isn’t even nine months old, but the bonds of community are already powerful and strong.

Early in the 2000s, a group of people who became known as the New Atheists wrote about the damage religion has done to our species.  With the kind of confidence that comes from tunnel vision, they posited theories about the evolution of religion, and why it is bad for the species.  I understand their concerns.  Religion has done a lot of evil over the centuries, and is not exactly distinguishing itself for its restraint and fair-mindedness right now.  But the New Atheists begin with a false assumption.  They assume we are a species of individuals.  We are not.

We are a tribal species, one of only nine on this vulnerable planet.  Harvard and MIT sociobiologist Edward O. Wilson calls them eusocial species.  They have the ubiquitous selfish gene common to all species. But these nine species also have a tribal gene.  They thrive in tribes and will sacrifice themselves for the sake of the tribe. Humans are the only primates of the nine species.

Not all tribes are good, and yes, some religious tribes wreak havoc.  As someone who has been on the receiving end of that havoc, I will not dispute that reality.  But there is another side of religious tribes.  In their book, American Grace, How Religion Unites and Divides Us, authors Robert Putnam and David Campbell say, “By many different measures, religiously observant Americans are better neighbors and better citizens than secular Americans.  They are more generous with their time and money, especially in helping the needy, and they are more active in community life.”

Mega churches thrive because they offer a great worship experience, not unlike what you might find at a good Broadway musical. They are transactional institutions. You show up with your presence and your offering, and you receive a great 75-minute experience and a ticket to heaven.

Transformative religion is not transactional.  It takes place when church attendance turns into lasting relationships and anonymity evolves into intimacy.  Contrary to popular opinion, that can be accomplished at big churches, but it requires more work.  It happens more naturally at smaller churches.  Unfortunately, most of the smaller churches cannot offer great music and preaching.

I love what God is creating at Left Hand Church.  Thanks to the brilliance of Heatherlyn, our worship minister, the music is wonderful.  And Jen Jepsen’s sermon last Saturday was just perfect.

We are a church of Millennials, GenXers, and Baby Boomers. We are gay and straight and transgender and married and single.  We do have our homogeneity.  We are all people who believe the truth will set us free.  In fact, most of us have paid quite a price for daring to live out that belief.

It is my prayer that Left Hand Church would continue to grow.  Aaron, Jen and I will do our best to help our members make that happen.  Churches that are diverse and open and honest and transformational are not everyone’s cup of tea.  But there are so many who are so desperate for a Christian community of honest spiritual seekers.  I believe we can meet their needs.

I am glad I rushed back from the airport.  I had one meatball, a little bit of chicken, and an amazing piece of upside down cake, but nevertheless, I left the dinner very full.

2 thoughts on “The Perfect End to a Busy Day”