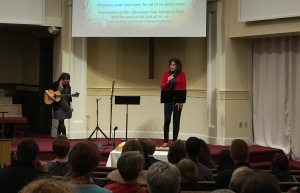 I was in Chicago last week for meetings of the Union of Affirming Christians and the QCF Conference.  It was cold. When I’m in Chicago I am either freezing or sweltering.   Chicago needs a temperature makeover.

On Thursday evening I went to dinner with eight friends at an Italian restaurant near my hotel. We had a private room with a large screen TV on the wall, playing an endless loop of an old movie shot on the Amalfi Coast.  The movie starred Clark Gable and Sophia Loren and there were a lot of scenes with a young kid.  One time he was smoking a cigarette.  There was no sound so the plot remained elusive.

On Friday I interviewed the Executive Leadership Team of QCF in the morning’s main session, did a workshop with Jonathan, hung out with a friend in the afternoon, and headed out.  By the time I got to Left Hand Church for services on Saturday evening, I’d almost forgotten I’d been in Chicago.  It was a quick trip.

Church on Saturday was absolutely wonderful and, as is usually the case, grounded me in the ritual I need to thrive.  Knowing where I will be at 5:00 PM every Saturday is important.

I had my season of obsessively counting media views.  The pleasure centers of the brain like watching counts climb on social media.  But the time comes, sooner or later, when the counts slow down and fewer people come up to you in airports thanking for you for your words.

Even if you happened to have been one of the biggest movie stars of the 20th century, eventually your movie career becomes an afterthought on the wall of an Italian restaurant, glanced at occasionally by a woman whose senses have been dulled by her second glass of the house red blend.

Do my children even know who Clark Gable is?  Sophia Loren is 84 and in a wheelchair.  I only know that because I just looked her up online.  Clark Gable and Sophia Loren are all but forgotten.  And what about the kid smoking the cigarette?  His name was Marietto, and he’s 71 years old now.  I hope his lungs are all right.

Donald Trump is president because Mark Burnett knows how to turn marginally capable humans into stars.  Burnett, who is now a born-again Christian, doesn’t have a problem with what he ultimately did by placing Trump in The Apprentice.  He was just chasing views, counting his way to higher ratings and a bigger bank account.

Don’t get me wrong.  I love that our TED talk has done well.  But it is far too easy to become enamored with even relative fame.  It is fleeting and fickle.  Fame is anything but grounding.

Jonathan Haidt, in his book, The Righteous Mind, says religion gave the human race the ability to work together beyond the level of blood kin. Specifically, two elements of religion gave us that capacity.  The first was the ritual of religious practice, which serves as a steadying force in people’s day-to-day lives.  Second was the strength of the relationships that developed within one’s religious community.  Religious ritual and deep relationships allowed our species to thrive.  They still do.

Last Saturday evening at Left Hand Church was amazing.  Jen preached a bold and daring sermon.  Heatherlyn, Jason and Ben crafted a beautiful worship experience. Jody did a combination communion meditation and stand-up comedy routine that brought the house down.  But it wasn’t just the service itself that made the evening electric.  It was the depth of relationships that are developing at Left Hand.

Jen wrote about it in her blog post in our church email yesterday:  “I am moved and encouraged by your stories – both victorious and difficult.  You do hard things and emerge on the other side.  None of this is easy but all of it is beautiful.”

The machine of celebrity uses you up and moves on.  I do not mean the people at TED or TEDxMileHigh.  They are wonderful!  I mean the machinery of social media and entertainment.  They were not created to serve human souls.  Left Hand Church serves human souls.

Left Hand Church invites you to live fully, embracing pain and happiness, joy and sorrow. If you want doctrine to matter more than life, we are not your church.  If you want tight boundaries instead of expansive love, we are not the church for you.  If you want to decide who is in and who is out, then you’d better look elsewhere. If you want celebrity pastors and fog machines, ditto.

But if you want to be rooted in the rich soil of lives authentically lived, then head on over to Fourth and Kimbark at 5:00 on any Saturday.  We’ll be there, waiting for you.

4 thoughts on “Grounded and Good!”