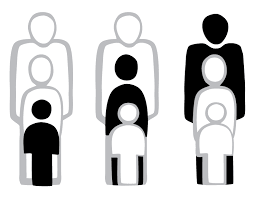 The decision of the United Methodist Church to reject the LGBTQ population has been on a lot of minds and hearts this past week.  I talked about it in my sermon on Saturday evening, and got choked up enough that I couldn’t go on for a few seconds.  It reminds me of my own swift departure from the church of all my days, and all my parent’s days, and at least two generations before them. Whenever I begin to take personally my ostracism from the church, I remind myself of the bigger picture.

In 1981 James Fowler wrote a book entitled, Stages of Faith. He wrote about the six stages of human faith development.  Everyone has a spirituality, whether acknowledged or not.  It is a part of what it means to be human. And everyone is in one of the six stages, or in the liminal space between stages.  While I like Fowler’s descriptions, I’m not crazy about his titles, so I’ve created my own.

The first I call the Magical Stage.  It is how we grasp the spiritual realms between two and six years of age.  We take in a mishmash of information from a plethora of sources, from Peppa Pig to the spirituality expressed by Grandma.  All of it falls into the realm of the magical.

The second stage of faith is the Literal Stage, which runs from around age seven to age 11.  For those of us who grew up in the Christian faith, this stage reminds us of our early Sunday School years, when we took every single Bible story quite literally.  Myth, metaphor and nuance were beyond our ability to grasp.

The third stage of faith development is the Conventional Stage, in which we accept without question the rules, regulations, boundaries and supposed unique superiority of the religion we have been given.  We are encouraged to live within that religious subculture, where all other forms of religious expression are seen as inferior, or even as an abomination to God.

A lot of people never leave stage three of faith development.  For some, the world is too frightening and they prefer hard boundaries.  Others are just not inclined to ask questions, but to accept whatever has been given to them.  While these folks have been around for eons and can be found in abundance in all forms of fundamentalism, they have been empowered in our current political environment.

The fundamentalists in stage three found they had the power to elect a president, and they are not inclined to stop there.  They’d be happy to impose their stage three understanding on our entire nation.  If you look at the political empowerment of stage three people in Islamic nations, you see what happens when fundamentalists control a political system.  It is truly frightening.

People in stage three have a hard time with people in stages four, five, or six.  They are too much of a threat, and must be ignored, or better yet, silenced.  This is nothing new in the development of our species. We just haven’t seen it in our nation in such clear and threatening forms.

Stage four of faith development is the Questioning Stage, in which a person begins to question what he or she has been taught about the religion of their younger years.  Their growing breadth of knowledge makes it difficult for them to adhere to the narrow definitions of stage three religious adherents.  Young people often enter this stage during their college years.  Some never exit, though the majority come back to some form of formal spiritual expression within a couple of decades.

A lot of people suggest that the Millennials and Gen Z have given up on traditional religion.  I do not think that is accurate.  I believe they are doing what most generations have done in their 20s and 30s – taking a break from organized religion.  Some will come back when children are born.  Others will not return until the arc of their life experience brings them back to recognizing the need for spiritual community.

Stage five is called the Mystical Stage, in which we have both a broader and deeper faith.  We have fewer needs for answers, and a new openness to mystery. We see the strengths and weaknesses of various faith expressions, and may decide to take up a religious expression different from the one in which we were raised.  We may move away from Christianity, toward Buddhism, or develop syncretistic expressions of faith.

The majority of those who enter stage five, however, come back to the religion of their youth, though often in a different expression.  At Left Hand Church in Longmont, Colorado, where I serve as one of the pastors, we have a lot of precious souls who are in stage five. It is a great pleasure to journey with them.

There are a handful of folks who find their way to the sixth stage of faith, what I call the Extraordinary Faith Stage.   Members of this group include people like Julian of Norwich, John of the Cross, Mother Theresa and Gandhi.  This past fall Jen Jepsen and I were able to spend a few days with Father Richard Rohr at the Center for Action and Contemplation in New Mexico.  He definitely qualifies as a man of extraordinary faith. I would also put my mentor, the late Dr. Byron Lambert, in this group.  You don’t run across many people in stage six.

It is helpful for me to think of the stages of faith when I am under attack, because most commonly those attacks are coming from people stuck in stage three. The more vitriolic the attack, the more uncomfortable they are.  They do not want to encounter people who remind them of the truth they intuitively know, that it is time to move on.

8 thoughts on “The Stages of Faith”