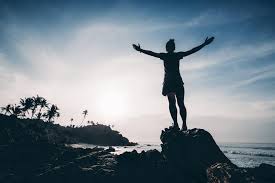 I often receive encouragement about my courage and bravery and it always embarrasses me.  I had a tendency to be dismissive until I realize how genuinely these compliments were given.  Now I express thanks.  Still, I do not feel courageous or brave.

When you grow up with someone who tells you they are perfect, and that notion is reinforced by a religion that teaches you must be perfect as Jesus is perfect, you believe perfection is attainable.  Unfortunately, it causes you to feel shame about the most basic of truths, that you are human.

When we receive good ego formation we learn early in life that we are flawed, but those flaws do not make us unlovable.  When we do not receive that assurance, we spend the rest of our lives searching for proof we are loveable.  In that desperate search for acceptance, the last thing we feel is brave or courageous.

In Shambhala:  The Sacred Path of the Warrior, Chögyam Trungpa defines the warrior not as an agent of destruction but as one who is brave.  He observes, “This is the definition of bravery:  not being afraid of yourself.”

Why would we be afraid of ourselves?  As James Hollis says in Living an Examined Life, Wisdom for the Second Half of the Journey, “We weren’t born that way (afraid of ourselves.)  But soon we learn experientially, and increasingly consciously, that we are tiny, vulnerable, and dependent on the huge powers around us.”  He goes on to say, “Whatever powers nature invested in us are easily overrun by the forces outside of us, and so we learn to deny, even fear, the powers within.”

Hollis later says the second half of life begins not at any chronological moment, but at the point at which we are obliged to radically consider who we are apart from our histories, roles and commitments.  A lot of people never arrive at that moment.  Many are too frightened, and with good reason.  John of the Cross had a name for what Hollis is describing.  He called it the Dark Night of the Soul.

I chose to consider who I was apart from my histories, roles and commitments.  It has not resulted in an easy life.  It has required a commitment to the truth, even when that truth renders you terrified and exhausted.  Not being afraid of yourself is hard work.

I was hoping that not being afraid of myself would allow me to confront and overcome a lot of my weaknesses.  I’ve learned you don’t overcome them; you just see them more clearly, which is a mixed blessing.  You better appreciate why people become annoyed with you, but you lament that your blemishes will not be erased.  Perfectionism returning to roost.

Not being afraid of yourself demands paradoxical strengths.  You must be at once gracious and unrelenting, accepting and demanding, vulnerable and self-protective.  You must be your own prosecution and defense, and ultimately, judge.  You must see yourself with a clear but compassionate eye.  If all of that sounds hard, well…

Transitioning genders strips you of status and standing.  You discover that some people were in a relationship with you because you were useful to them.  Others cannot bear your attempt at authenticity, because they have already convinced themselves they are unable to do the same.  You are too much the reminder of the road they did not take, the one less traveled by.  And of course, there are others who truly believe you were wrong and that your transition is unforgivable.  It’s sad, but it is what it is.

While my transition was devastating for my entire family, they have all responded by choosing to go on their own Hero’s Journey, with its road of trials and deep dark cave.  I hate seeing them in pain, but I understand its necessity.  My love for them is stronger and deeper than ever.

I gravitate to friends willing to go on a similar journey, those who risk everything because they believe the truth sets us free.  They make difficult decisions and awaken the next morning with a vulnerability hangover, but move forward anyway, because they believe it is the only decent way to live.  Their belief in themselves and in a loving gracious God, propels them through the desert, unsure of the destination, but certain of the direction of true north.  Their heart knows the way.

I love these friends and family members who journey with me.  I respect the pain they uncover in my life as they also uncover pain in their own.  The truth is empowering, if painful.  It is freeing, if costly.  And as I say often, the pursuit of truth is sacred and holy and for the greater good.