Heart of My Own Heart, Whate’er Befall

Last week I saw my parents for the first time.

The day began with the hymn Be Thou My Vision running through my mind. The tune stayed with me as I drove from Cincinnati to Lexington, Kentucky. I traveled with equal parts hope and fear, carrying with me the difficult memories of a painful business meeting the night before. I had no margin.

I arrived at the apartment building and walked down the long hallway, breathing deeply. The door to the living room was open. Mom was seated in her recliner and Dad was in the kitchen getting her some ice water. They both looked up, puzzled. Dad asked, “Now, who are you?” I said, “It’s your child Dad, it’s your second born.” He asked again and I answered, “It’s me, Paula.” Dad said, “Oh my!” I walked to where Mom was seated and she asked Dad, “Who is this?” I answered, “It’s your child, Mom. It’s your second born. It’s Paula.” With a confused look she asked again, “Who?” and I answered, “Paula.”

With that she reached out her arms and said, “Come give your mother a hug.” As I bent down she proceeded to tell me about my birth, which was more than a little odd. I realized this was her prepared agenda. She was going to let me know that she had been there and I had been born a boy. But Mom had a hard time staying with her agenda. It was clearly a woman in her living room, and the obvious beat out the theoretical.

Dad sat down and said, “Well, you do not look at all like I thought you might.” I could tell he was pleased I did not look like a man in a dress. It made it easier for both of them to understand the fundamental truth – their son is a woman.

For the next three and a half hours the conversation did not stop. There were tears and much laughter. I thanked my parents for what they brought into my life, and expressed my gratitude that they had allowed me to visit. There were difficult moments. With tears in his eyes Dad asked, “Why do you believe you are a woman?” He listened intently as I explained why people are transgender. This 93-year-old man expressed far more openness and understanding than many fundamentalists one-third his age. Most evangelicals come at the subject self-referentially. “Look what you did to me.” They almost never ask about the pain I must have suffered for all those years. It’s all about their shock and dismay. Dad had moved beyond that. He wanted to be sure he understood every single word I said. His openness warmed my heart.

Mom made a few half-hearted attempts to return to her agenda but she couldn’t help herself. When I remarked on my affection for the cups and saucers on the shelf, she said to Dad, “Well Dave, she wants some of those cups and saucers. I told her to mark the ones she wants with her name.” Every time she referred to me in the third person, she correctly gendered me. It was obvious a female was in her presence, and she responded accordingly.

I had a chance to tell both of my parents what I appreciated about them. I thanked Dad for his gentleness, kindness, love, patience, steadfastness and loyalty. I thanked Mom for her tenacity, intelligence, sense of humor and intellectual curiosity. As our time together wound down, Mom said, “Well my lands, I don’t think I’ve had this many compliments in years.”

At one point deep into the conversation I asked my parents why they had decided to see me. Mom playfully said, “Well, I’ve heard it said that sometimes people die in their 90s, so I figured we’d better get together.” Through tears Dad said, “I was afraid we would never see you again.”

I gingerly stepped behind their chairs to position myself for pictures. Then I prepared to leave. I gave Mom a long hug and whispered that I loved her. Mom rarely ever said to me, “I love you.” She always stuck with the less emphatic “Love you.” This time Mom said, “I love you.”

I hugged Dad for the longest time and we both cried. He too said, “I love you,” not words I often heard from my father. I told them I’d be back in a couple of months and look forward to seeing them again.

As I walked down the hallway I kept saying, “Breathe Paula, breathe.” After an enjoyable first visit with my brother (I’ll write about that another time) I headed to my cousin Jane’s home in Richmond. She and John greeted me with quiche and salad and snicker doodles and Jane cried with me late into the evening.

I wrote my friend Christy and thanked her for reminding me that loving is best, even when it is not reciprocated, because you never know when God might change a heart, sometimes even yours. 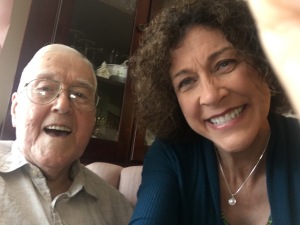 15 thoughts on “Heart of My Own Heart, Whate’er Befall”