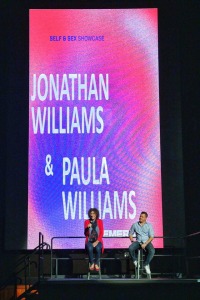 This past weekend my son and I spoke at the Emerge Festival in Las Vegas.  The festival was a combination of contemporary music, art and spoken word.  We did a modified version of the TED talk we gave at TEDWomen last November. We will be giving a similar talk as part of a discussion next month at the TEDSummit in Edinburgh, Scotland.

I arrived in Las Vegas before Jonathan and took a Lyft to the Hard Rock Hotel.  When I arrived, I remembered how much I dislike Las Vegas.  The casino was dark, confusing, and to me, depressing.  When I finally got to my room, I did not leave.  I ordered room service for dinner, and again for breakfast the next morning.

Jonathan came to the room Saturday morning and we went over our talk.  We had each written our portions without knowing the details of the other’s talk.  They dovetailed perfectly.  We practiced the talk four times while I ate a piece of bacon or toast here and there.

The audience was not large, which I imagine was a disappointment to the promoters, but they were enthusiastic.  Jonathan and I had so much fun.  I also loved speaking with him three weeks ago, when we were at the City Club of Cleveland.  I watched that interview on public television.  It was obvious we were enjoying ourselves.  I felt the same in Las Vegas. We hugged tightly when we finished, and I headed back to the airport.

Other than the fact that I got to speak with my son, the trip to Las Vegas was just another speaking trip among the many I have done since my first TED talk a year and a half ago. (As of last week, that talk has been viewed over two million times.)

But last weekend did remind me of the courage it has taken to travel this road.  I suppose the reminder was the juxtaposition of this trip and my last trip to Vegas.  This time I was speaking in a marquee venue in a gigantic Vegas casino, and my last trip I was preaching at the largest church in the State of Nevada, Central Christian.  The two could not have been more dissimilar, and I thought of how far I’ve traveled since those halcyon days in the upper echelons of evangelicalism.

I came to believe the truth does set you free, and I chose to stake my life on it.  I sometimes joke that when I came out, I was either courageous or stupid. When I say that, it is only because I feel awkward acknowledging what I know is true.  I was courageous, period.

Pretty much my entire world rejected me.  Nevertheless, I persisted.  Though the road of trials turned into an even more nightmarish deep dark cave, I lived to find the Holy Grail, and I returned with it, an offering to those from whom I took my leave.

The Holy Grail was my discovery that the truth does set you free, and the authentic life is worth living.  It is holy, and sacred, and for the greater good.  On the other side of darkness is hope, burning like a beacon, drawing you deeper and deeper into the world.  And you are not alone.  There, beside you, are other courageous fellow travelers bent on living authentically.  There is Jen, Christy and Kristie, whose own authenticity has cost them greatly.  Yet they always find the strength to comfort and strengthen me.  There is Cathy, Jael, Kijana, Jana and Jubi, and those like Aaron and Eric and David, who are always ready to encourage.

As I sat in the hotel room, listening to my son’s passionate speech, I caught the full truth of what he was saying.  Jonathan has given up his comfortable life among the evangelical elite to strike out on his own courageous journey. Giving up his privilege, he has gone from being a skeptic to an ally, to an accomplice, traveling the world with me challenging the status quo, fighting for gender and racial equity.  And he has done all of that with transparency and authenticity, owning his own stuff in ways I never could have done when I was his age.

Here Jonathan and I were on stage in Las Vegas, boldly speaking about our faith, and it’s ability to transform not just the two of us, but anyone willing to take the road less traveled by.  I’ve been on this journey long enough to be certain of an important truth.  David Whyte captured it in these lines from his wonderful poem, Sweet Darkness:

The world was made to be free in

You must give up all the other worlds

Except the one to which you belong

And the sweet confinement of your aloneness

Is too small for you.

As we finished our talk, we both stood in the staircase, between the stage and the green room of the theater.   Jonathan and I congratulated each other on a job well done, and tears filled my eyes, so great my happiness that when we choose to live courageously and authentically, we are never alone.  The brave, they come alongside and travel with us.  Sometimes, it’s even your own son.