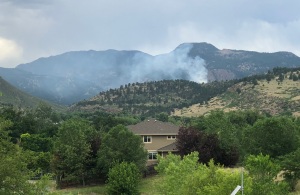 I’ve kinda been all over the place lately, from feeling hopeful to angry to frustrated to hopeful again.  In other words, my life during Covid-19 is going pretty much like yours.

Over the weekend the Washington Post played a video of a young Methodist associate pastor surrounded by an angry crowd that descended on Gettysburg because they heard Antifa was planning a flag burning at the historic site.  The pastor, who was wearing a Black Lives Matter shirt, was there to visit the grave of an ancestor.  His timing wasn’t great.  Looking for someone to confront, 50 right wingers surrounded the associate pastor, who recorded the encounter.  One guy said, “Just because you’re gay you think you can say this stuff.”  The pastor said, “No, I’m a Methodist pastor and my denomination does not allow that.”  The pastor was eventually rescued by a park policeman who suggested it might be in his best interest to move along.

The whole thing was surreal.  I can imagine a friend of the pastor asking, “What’d you do today?”  “Well, I was out minding my own white, straight and definitely not gay Methodist pastor business when I was surrounded by an angry mob.”  After watching the video, I sat and stared at my computer screen for a while.  It’s taken about a day to process it all.

About a half hour ago, I came to my back patio to start writing this post.  Immediately I noticed a forest fire a few miles west on the east-facing slope of Coffintop Mountain.  Since the fire is nowhere near hiking trails or dwellings, I’m sure it was started by a lightning strike from the dry thunderstorm that blew through an hour ago.  The fire is definitely growing.  I just went inside and got my binoculars.  When you live in the foothills of the tinder-dry Rockies, forest fires make you nervous.

I feel better now because I can see helicopters dumping buckets of water on the fire.  When they release the water, it looks like a firehose from the heavens.  I’m sitting here fixated on watching the helicopters unleashing their Bambi Buckets.  It’d be nice if God put out fires like that.  You know, “Angry mob surrounds young pastor – God drops well-aimed 250-gallon Bambi Bucket. Video at 11:00.”

God is subtle.  I want God to make herself definitively known.  Buckets of water.  Well-placed lightning bolts, with captions running up each greased streak, “Do not piss me off!  Signed, God.”  I want to see God clearly at work in the middle of this madness.  I want God to speed up the development of multiple vaccines, including the cool RNA ones that are easy to reproduce.  Then I want God to require all anti-vaxxers to take courses in how to protect an entire species.  Or maybe you could take care of the right wingers and anti-vaxxers with the same required course – Identifying Trusted News Sources.

I know, I don’t sound very sympathetic, not even toward the associate pastor.  Since when is an appropriate defense, “I’m straight and you can believe me because I’m a Methodist pastor.”  That’s the best you could come up with, really?  Like I said, I’m not feeling charitable.   But hey, that forest fire looks like it will be coming across Hall’s Ranch any minute now before it burns through town and destroys my house, so this feels like no time to be diplomatic.  I need to get this post written before I have to fill my car with important documents and flee.

I preached last Saturday at Left Hand Church.  (You can always find a link on my public Facebook page – Paula Stone Williams.)  I suggested that America is not God’s favored nation.  I doubt anybody from the Gettysburg Antifa-fighters watched the message.  The truth is that God has not had a most favored nation for a few millennia.  But that does not mean God does not love America.  Truth is, I love America too.  In fact, my love for my country demands that I examine how she behaves.

When it comes to loving our planet, I met an amazing TED speaker last week who is chronicling ancient tried and true green answers to everything from building bridges to treating sewage.  (You should look up “Root Bridges of Cherrapunji.) Another TED speaker noted that the number of people who believe America has a problem with systemic racism has doubled since 2016.  Sixty percent of Americans are finally getting it.  That’s a long way from where we need to be, but at least there’s progress.

I really am hopeful.  Yes, American exceptionalism has caused us to turn a global pandemic into a partisan divide, but on the whole, it looks like Americans are caring for their neighbors.  For the good of the cause, the entire country shut down for a couple of months.  That our federal government squandered that collective consciousness is not the people’s fault.  We did what we were asked; we focused on the greater good.

We are a story-based species, which takes me back to the Antifa-fighters and the pastor and the anti-vaxxers.  They each have a story, and you can tell from my snarkiness that at the moment I am not really open to hearing theirs.  I am angry, and I am not ready to give up my anger.  Which clearly means I am a part of the problem.  Of course, the truth is that we are all a part of the problem.  None of us will hear the story of another until we can make peace with our own story.  And that is hard work.

Teilhard de Chardin was rejected by the Roman Catholic Church.  But somehow, he remained willing to do the hard work, which is why he was given to writing lines like this: Someday, after mastering the winds, the waves, the tides and gravity, we shall harness for God the energies of love, and then, for a second time in the history of the world, man will have discovered fire.

Then again, maybe that’s not the best choice for a quote, considering the forest fire at Coffintop.  But the smoke is diminishing, for real.  The helicopters with their Bambi Buckets are doing their job.  The news just said the fire is under control.  Now, if I can just get the fire in me under control.