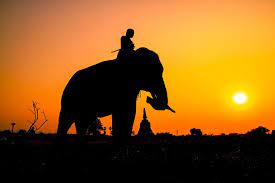 In his book, The Righteous Mind, Jonathan Haidt says people do change their minds, but not unless information comes to them in a non-threatening way. The book includes a host of other intriguing ideas, but that was my biggest takeaway. The second I read the words, I knew they were true.

Haidt uses the analogy of a rider on an elephant. The rider believes she is in charge of the direction in which the elephant is moving, while in fact, the elephant has been in charge all along. In the analogy, the elephant is all of the decisions being made by our unconscious minds. The unconscious mind is the part of ourselves that is truly in charge. Where does the unconscious self come up with its ideas? It establishes its hard and fast truths very early in life, while we are vulnerable children, incapable of surviving on our own. As it turns out, that ends up being a lifelong problem.

As a child I could never express the tiniest bit of anger or frustration with my mother, or I would be immediately rejected by her. Until I finally stood up to my mother when I was 35 (I tell the story in Chapter 18 of my memoir) I was still allowing my inner child to call the shots. That inner child was terrified of abandonment. The truth is that child remains within me. It is still my tendency to believe that if I express any kind of displeasure to those close to me, they will permanently reject me. (That it has happened recently in real time doesn’t help – chapter 14 in the book, if you’re wondering.)

The truth is that most people do not reject you when you become angry with them. They might become defensive, and attack you back, but eventually they come around. Relationships withstand conflict quite nicely. My rational mind knows that, but the elephant of my inner child still thinks she can never express anger, or say no to a request, or she will be disowned and rejected. When I listen to that inner child, it is not my conscious mind making the decisions. It is the elephant of my unconscious self.

That is why it is so important to constantly remind ourselves that we are no longer helpless children. We are now adults, and if we do happen to be rejected, the world will not end. We have the resources to deal with it. It is a constant battle to not allow important decisions to be made by the frightened child within.

I have friends who want to get a Covid vaccine, but they are afraid of upsetting their parents, or their people, their tribe. Remaining in the tribe is more important than protecting their own health. They know that saying vaccines are dangerous is factually false, but in their tribe, it is socially true. The fear of ostracism wins out over protecting one’s own health. That is the power of the need to belong.

Which takes us back to where I began. People will take in new information, but only if it comes to them in a non-threatening way. If their tribal influencers tell them it is all right to get a vaccine, they will get a vaccine. If their tribal leaders tell them transgender people are mild-mannered Americans who deserve the same civil rights as everyone else, they will accept transgender Americans. The question, therefore, is how to reach tribal influencers? We influence the influencers by telling stories.

I get paid a lot of money to speak at colleges and universities, but I am willing to go to Christian universities at my own expense. Why?  Because I know if I can get in close proximity to the students and faculty and tell my story, minds will change. Suddenly a transgender woman is not a threat. She is just a woman. If a few of those who take in that story are connectors or tribal influencers, others will readily follow.

The goal is to reach a tipping point at which enough tribal influencers have taken in the new information that it is quickly accepted by the remaining members of the community. People can accept the facts, because it no longer means being abandoned by the tribe. They can say what they have known to be true for a long time, that transgender people are not a threat to anyone. They no longer fear being ostracized for speaking the truth.

There is a second way in which people take in new information and change their minds. It is when they no longer fear abandonment by their community, because they have a new community ready to embrace them. If you are an evangelical Christian, and you are affirming of the LGBTQ+ population, you will be ostracized by your evangelical church. But if there is another church ready to take you in, a church with a similar style, music and polity, you no longer fear abandonment. You have a new tribe waiting.

That is one of the reasons I say if Left Hand Church didn’t exist, we would have to invent it. There are many who want to leave the excesses of evangelicalism, but they fear abandonment. If they know they have somewhere else to turn, it is easier for them to stand up for what they know to be true.

There is yet one more method of bringing new information in a non-threatening way. Novels, biographies, and memoirs are ideal vehicles for getting a conversation inside someone’s head without the person fearing they will be judged by others. You can read a book in the privacy of your own home, at your own pace. You can enter the story, as you would if the person was sitting next to you in the living room. And your mind can be changed.

My heart has been warmed by the evangelicals who have read As A Woman – What I Learned About Power, Sex, and the Patriarchy After I Transitioned. I hear from them almost every day. Some are from my old denomination. Others never knew Paul but feel the need to reach out after they have read my story. It is the major reason I hope the book sells well. I believe it has the power to change the narrative, narrow the divide, and bring us a little closer together.

It will not be easy to close the great American divide. But it is not impossible. We must begin by telling stories, bringing new information in a non-threatening way, one person at a time.

And so it hopefully goes.

6 thoughts on “People Do Change Their Minds, But Only If…”